In all of my years, I have never encountered a phenomenon like Pokemon Go. It all seemed to happen instantly – one moment we were all at home or sitting in queues playing our silly little games, crushing candy and building virtual cities, and then, suddenly…the Pokemons arrived. And we all flocked outside to catch the most and preferably the most rare Pokemons, to increase our CPs and beat up other Pokemons and Pokemon trainers. 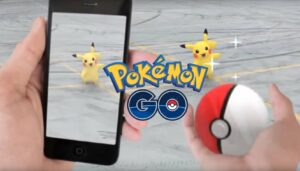 A week after the game launched, it seemed like it was more difficult to find people who weren’t playing Pokemon Go, than those who where. Two weeks in, and they are absolutely everywhere. Whenever there’s a large group of people staring at their phones, shouting “I got a new one!” chances are there is a module lure at a Pokestop nearby. In fact, if you go looking for a module lure in a park (any park, from what I’ve noticed), you don’t even need to look on your map to find the lure – just follow the flocks of people, whichever way they might be heading.

If you’re passing by someone with a phone in their hand, and assume they are probably texting or replying to some email – just take a closer look. They just caught another damn Pidgey or they’re struggling to catch another Zubat.

There’s so many people playing, that people have had to put up notices such as this: 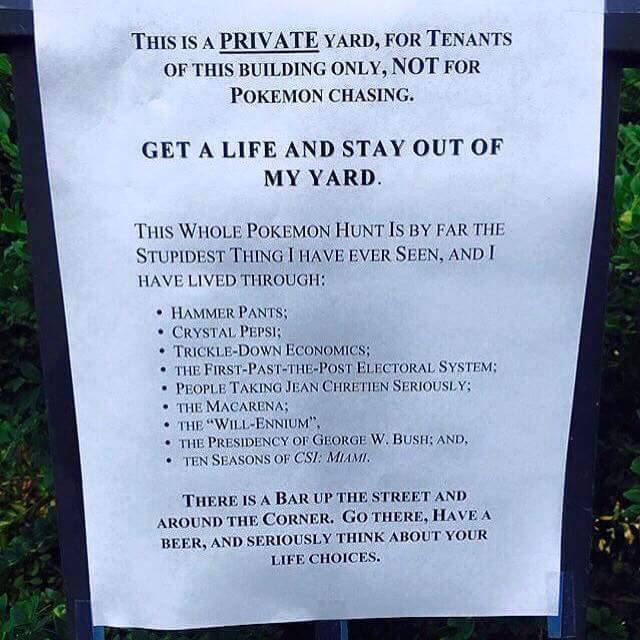 There’s never been anything else with such a quick and huge impact. Not Candy Crush, not Angry Birds, not Flappy Bird and not even Facebook. It is such a huge hit, that at one point, there were over 47.3 million people trying to log in at the same time. Every time the game is released in a new country, their servers go down. Within hours of the launch in Canada, their servers were already at capacity.

The #PokemonGo phenomenon and how #businesses can leverage it via @LilachBullockClick To Tweet
I realize as I am writing this that it is almost impossible to put into words or even numbers how big this game is. The only way to truly understand its impact, is to get out of the house and look around. I’m sure not even the creators, Niantic Labs, expected even close to this type of success. They couldn’t predict that people would actually quit their jobs in order to become full-time Pokemon trainers (Yup, that really happened!), or that people would be so absorbed in the game that they would fall off cliffs.

Pokemon Go is so popular, so engrossing, that even the biggest celebrities can play undisturbed. In fact, just a few days ago, Justin Bieber was walking around New York playing Pokemon Go among crowds of people, and nobody recognised him – because everyone was too busy looking at their own phones, searching for Pokemons.

It’s an almost perfect game (aside from its technical issues) – you can play it constantly, but you can also pause it for as long as you like. It gets you out of the house, in fact it makes you want to walk everywhere so you can find as many Pokemons as possible, and so you can hatch your eggs. It also makes you stare at your phone for hours at a time, while you can also meet dozens of people everyday, and start talking to them instantly like you’ve been friends since childhood. If you want to make some new friends, just pick a Pokestop, turn on a module lure, and wait for people to come to you. Because they definitely will!

When my daughter got the game and excitedly told me about it, I didn’t really get it. Days later, if not the next day, we were already going together on Pokemon hunting expeditions.

Of course, as with every big cultural phenomenon, haters will pop up. Usually the bigger it is, the more haters there will be.

Now, it will be interesting to see how long this will last, and if it will disappear as suddenly as it appeared. Until that happens though, there’s a lot of game to catch.

Can businesses leverage it, though? Not only that they can, but they already are. From phone walkers that will walk your phone to hatch your eggs, to big businesses doing Pokemon Go promotions, and Pokemon Go-related startups, everyone is trying to use the game to their advantage. And probably so they can play while they work.

While businesses can already leverage Pokemon Go, as the game evolves, and more updates are made, as well as deals with companies such as McDonalds (which seems like a sure thing), I’m positive there will be even more possibilities for sponsored Pokestops, in game location-based advertising, and much, much more.

One of the first startups to pop up in Europe is Pokemondo that basically helps you “get bounties for luring Pokemons to businesses all over the world.” The concept is very simple, and already gaining a lot of ground. All you have to do as a business is send the lure bounties to Pokemondo, who then send them to any Pokemon trainers nearby who have signed up. These trainers will then lure Pokemons to the physical location of the business, which means advertising, more clients and more sales. Pokemondo claim that most businesses get a 20% increase in sales, and some of them as much as 75%.

You can also lure people yourself to your business. Pokestops are almost everywhere so you probably have one near your business location, and with a few strategic lures, you’ll get an increase in traffic that can lead to mare sales.

Another idea is to set up Pokemon Go competitions. For example, you can start a lure, and announce on social media that the first people to catch a Pokemon at your location will receive a free voucher. Or, perhaps, the first few to catch a rare Pokemon will get a special prize.

Pokemon Go can help businesses increase their sales, as well as their exposure online and offline. And as I mentioned earlier, future updates of the game will probably bring even more possibilities to leverage it. The only losers will probably be Ubers, taxies and public transport – after all why take a taxi when you can hatch an egg and catch a few pokemons?

What other ways can businesses use to leverage Pokemon Go? Is Pokemon Go a fad – and how long will it last? Leave your comments below and please share 🙂

The Pokemon Go Phenomenon: How businesses can leverage it

4 thoughts on “The Pokemon Go Phenomenon: How businesses can leverage it”