Social media marketing may have been around for years now, but businesses, both big and small, are still making big mistakes. And even though it’s only been less 6 months since the year started, big social media fails keep pouring in. So, let’s laugh at them for a second, but also use them to understand how to avoid making the same mistakes – some of them might be huge corporations, but they still teach us a lot of valuable lessons. In this blog post, I am going to share the biggest social media fails of 2017:

Social media fail no. 1: Be careful what you retweet: the IHOP vs. Hillary fiasco

Personally, when I think social media fail, I think “oh, someone’s posted something naughty…” but IHOP have proved that even something as simple as a retweet can turn the Internet against you.

Politics are always inflammatory and they tend to spark a lot of controversy, so it’s never a good idea to get involved, as a business – even if it’s something as simple as a retweet.

In IHOP’s case, it was this retweet that caused all of their problems: 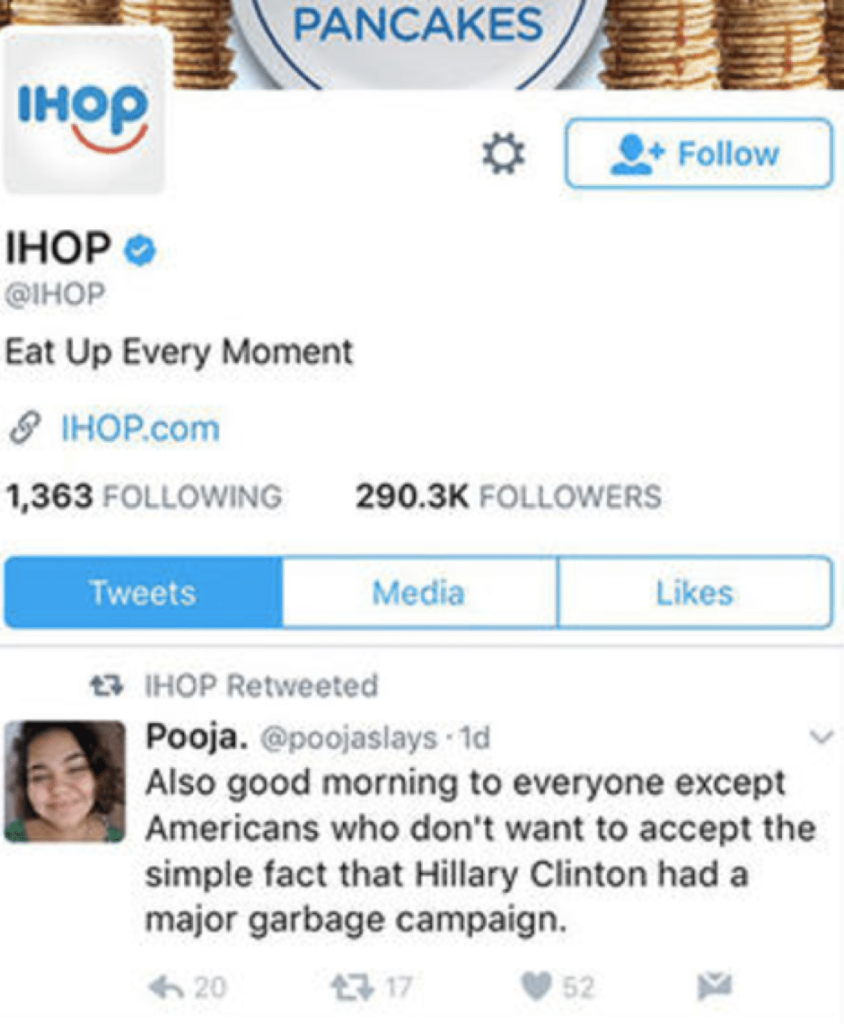 But, it wasn’t only the retweet that was the problem – it was also the fact that, after the retweet, IHOP claimed that they had been hacked, something that many people had trouble believing. As one person tweeted, “It seems odd to hack IHOP to just RT” – and they weren’t the only ones to think so. This perceived lie ended up causing more problems for IHOP than the initial retweet – which teaches us an important lesson: the way you handle your ‘excuses’ can have a bigger negative impact than the initial transgressions.

So, whenever you retweet someone, make sure that it’s OK to retweet – either because the message is inflammatory or because it isn’t consistent with your own business values; or, if you’re sharing a blog post, go through the post to make sure it’s in line with your own beliefs.

Social media fail no.2: the McDonalds vs. Trump Twitter fiasco

This is one of the biggest, most discussed social media fails of the year, so far – the McDonalds anti-Trump tweet where the president of the United States was called “disgusting”: 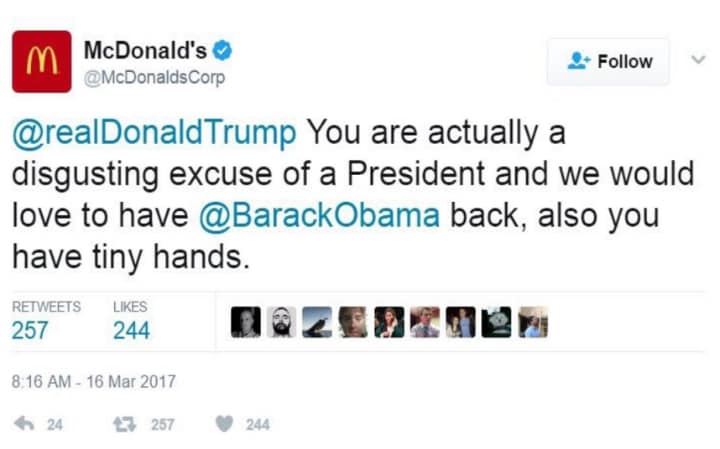 But, as we all know, the Internet moves fast – especially on Twitter. The tweet generated a lot of attention, with many users poking fun at McDonalds, but there were also plenty that took offense and claimed they won’t eat at the popular fast food chain.

The most important thing to learn here is that you need to keep your social accounts safe; even as a small business, you’re in danger of getting your account hacked, so you should always make sure that your accounts are protected:

Social media fail no. 3: Wendys – Think before you tweet

Wendy’s Twitter account is notorious for their roasting of other users; they are often hilarious in the way they deal with the people interacting with them, or even with other fast food chains:

@realJoshAbraham @McDonalds We’ll stick to our fresh beef. They can have those ice chips they’re serving.

Even though their accounts’ wittiness is definitely working for them, as it gets them a lot of attention on social media and on traditional media, even they can take things a bit too far. In this case, Wendy’s tweeted a meme without checking its meaning – or, at least, that’s the assumption: 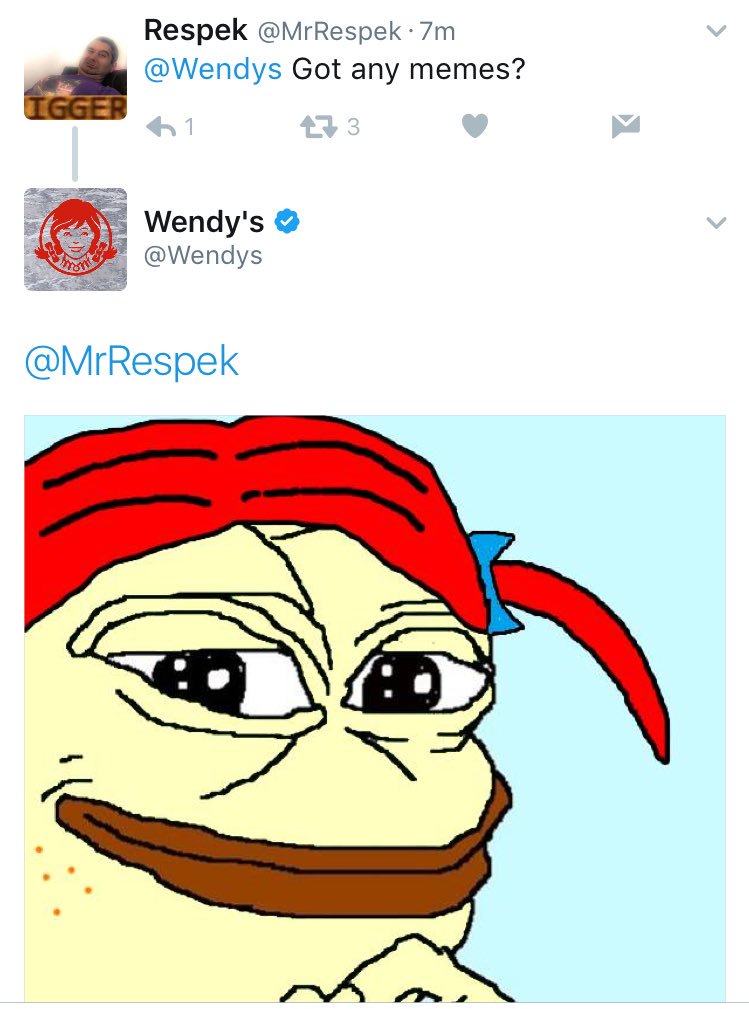 The anti-semitic Pepe the Frog meme immediately attracted backlash from the online world, which prompted Wendy’s to delete it:

“the person who tweeted it did not know the meems new meaning, and promptly deleted it.”

There’s an important lesson to learn here for businesses of any size on social media: if you’re not sure you know what a meme means, don’t post it – they’re fun, they’re popular, but the wrong meme can have a big negative impact on your success.

This is a very odd type of social media fail – but, in my opinion, it still is. In the United Airlines’ case, their failure to understand that everyone has a camera handy at all times and that you could be filmed at any given moment, has resulted in a worldwide scandal, a viral video and a huge drop in value for their stock. Fortunately for us, though, it also resulted in some very funny backlash on Twitter:

United Airlines is pleased to announce new seating on all domestic flights- in addition to United First and Economy Plus we introduce…. pic.twitter.com/KQjPClU2d2

Board as a doctor,
Leave as a patient. #NewUnitedAirlinesMottos

This fail teaches us that we need to always take care how we conduct ourselves in public; you can be filmed at any given time and you definitely don’t need to be famous to become viral.

Yahoo! Finance made a very simple, yet devastating mistake – pressing on “n”, instead of “b” on their keyboard, which landed them in hot water, immediately:

This was, most likely, just an honest mistake as the N and B letter are right next to each other on keyboards. It’s something that can happen to anyone, whether it be on social media, in your emails, your blog posts and so on – which is why you should always, always check your tweets, your Facebook posts and so on before posting anything. It only take a few seconds of your time and it can make a world of difference – like in Yahoo!’s case.

Although big corporations have a bigger following and they are much more publicized than small businesses and entrepreneurs, their social media fails can teach us all a lot of valuable lessons. From spell-checking all of your social updates before publishing and making sure memes aren’t offensive, to protecting your account from hackers, these are important lessons to learn.

What are some other funny, entertaining or even educational social media fails you’ve seen this year?

The biggest social media fails of 2017

3 thoughts on “The biggest social media fails of 2017”